Titia Ballot is predominantly known for her etchings, but also works in pastel, screen printing and lithography. She regularly participates in group exhibitions here and abroad. Recent international exhibitions include Rock Art in Contemporary Societies, Siberian National Art Gallery, Kemarova, in 2011-12 and Run with the Fire, a virtual exhibition by 25 selected artists from 6 continents during the 2012 Olympic Games. She has twice been granted a residency at the Frans Masereel Centrum voor Grafiek, Kasterlee, Belgium.

In 2008 the Suid-Afrikaanse Akademie vir Wetenskap en Kuns awarded her its Medal of Honour for Visual Arts in recognition of her contribution to  graphic arts.

To date Ballot presented 29 solo exhibitions five of which took place in Germany and Belgium. In 2007 she featured as the Focal Artist of the Streek Exhibition at Aardklop National Arts Festival, Potchefstroom where in the same year the University honoured her with a retrospective exhibition of her work spanning 40 years. Stellenbosch University did likewise the following year and published a comprehensive catalogue. She was festival artist at the Cederberg Arts Festival, Clanwilliam in 2012.

Born in 1941 in Clocolan, South Africa she grew up in Bloemfontein and Pretoria. After completing her studies in the Department of Fine Arts at the University of Pretoria in 1963, Ballot taught Art at secondary schools in Johannesburg, Pretoria and Potchefstroom.  From 1972 to 1981 she lectured in Printmaking at what is now the North-West University (Potchefstroom Campus). During 1982-85 she lived and worked as free lance artist in Bonn (Germany) and returned to Potchefstroom in 1986 where she was Senior Lecturer and Head of the Department of Fine Arts until 1991 when she moved to Stellenbosch where she continued to work as a fine art printmaker. In 2006 she moved her studio to Onrusrivier near Hermanus, South Africa. 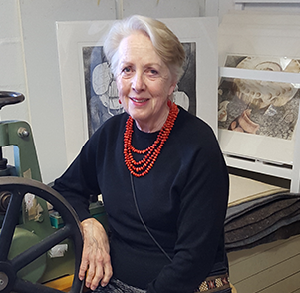