Janse van Vuuren’s work explores (and essentially) redefines authentic obsessions. It is comparative to reading a diary or walking through all of the hallways where he has ever been. This underlying theme gives the work a lyrical and poetic feel that oozes with the symbolism that is ever-present in Janse van Vuuren’s work. It is this very symbolism that leaves the work open to interpretation, as Janse van Vuuren denies the viewer the ‘summing up’ of the work and gives them the responsibility of drawing their own conclusions.

Throughout Janse van Vuuren’s works over the last while; an ongoing theme of South African Culture, subculture, deconstruction and black humour informed by his interest in the Philosophy of the Absurd play a key role. He works mostly with the imperfect figurative form as the vehicle through which he communicates. The viewer will often find mundane found objects in the work. This creates a new meaning within the object itself. Janse van Vuuren also plays with the idea of scale and proportion in his works to embody an absurd take on reality.

His interests in sculpture are fixed in the notion that they are three dimensional representations, and not pixel perfect copies of reality. He often refers to writers and musicians.
Another aspect of his work is that the viewer can create small narratives within the works. He mainly works from his own family and friends, and is trying to create works that the viewer can relate to. He feels that if you can leave the viewer with an emotion, memory or a grim smile, then the work itself has fulfilled its purpose. 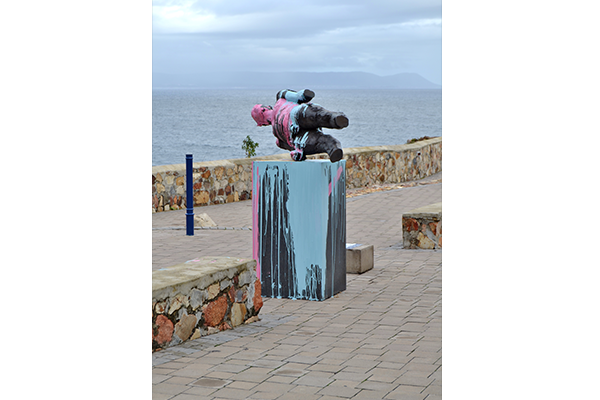