Born in the small town of Montagu, in 1956, Willie Bester’s creative talent was apparent from a young age.  The toy cars from recycled wire just like the other kids, but Willie’s stood out due  elaborate decoration and metal work.  Willie’s passion for political and social issues was ignited when he had to leave school at the age of 10 to help the family financially due to the forced removal from their home under the Group Areas Act.

At the age of 26, after working as a dental technician’s assistant for in Cape Town, Willie finally re-immersed himself in his art and opened his first solo exhibition in 1982 of street scenes and landscapes.

During adulthood his art became a vehicle to express the inequalities that he witnessed and subjected to. He attended part-time classes at the Community Arts Project (CAP) in District Six in 1986, where he found himself surrounded by a community of socially committed artists.  He quickly became an active player in the anti-Apartheid movement expressing his political observations and ideals through an assortment of mixed media.  He became known for his signature creations, combining oil and watercolour paints with photographs, newspaper clippings and scrap materials acquired from local dumps.  Tins, bones, car parts, road signs, military paraphernalia, musical instruments, recycled objects, toys, farm implements and  junkyard detritus found a way into his vividly coloured artworks. By the late 1980s Willie had achieved success as an artist.

In his role as a “struggle artist” he charted  the dramatic social and political developments in post-Apartheid South Africa.   He adresses  issues of crime, greed, poverty, corruption and government accountability in the “new” South Africa. 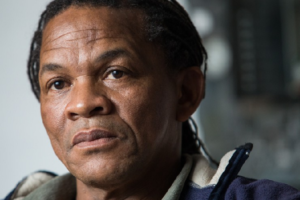