Njara work is centred around the contradicts of his Catholic education in contrast with Xhosa ancestral rituals. Through his pieces, he explores an experience of identity construction, spiritual awakening and development during his boyhood years in rural Transkei. Njara’s work problematizes his negotiation between his Catholic education and his traditional upbringing. The artist treats these two polarities as binary opposites which he does not necessarily seek resolve, but use them to construct a new emergent identity. Not in any way suggesting that identities are singular and fixed, but they could possibly be perceived to be multifaceted and fragmented. He brings this investigation of his own identity in conversation with the human existence within technocratic social orders.

These postcolonial constructs of identity are explored through the use of large bronze/ concrete sculptural works. Njara’s work is often unpolished and raw, exposing the internal workings of machines through tools, cogs and mechanisms. These relate to his need to deconstruct these binaries and consider each mechanisms contribution to his identity and reflect the hybrid contemporary African identity. Viewing the internal workings of these pieces also alludes to something more sinister, as he attempts to consider the use of religion in constructing a national identity.

Although Njara work conveys a personal investigation of his identity, this exploration can be applied to a collective conscious, where the diversity within South Africa is creating a hybrid third culture, and essential, separatist, understandings of identity are disappearing as our nation becomes trans-conscious. 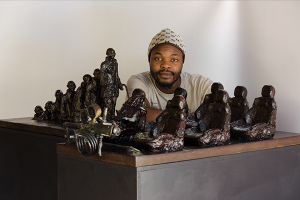