Lionel Smit is considered one of South Africa’s most talented artists, best known for his contemporary portraiture executed through monumental canvases and sculptures. Perhaps more than anything else, Lionel Smit’s art is defined by a deeply rooted symbiotic relationship between sculpture and painting. Born in 1982 in Pretoria, South Africa, Smit was exposed to a world of sculpture through his father, renowned sculptor, Anton Smit, who worked from his studio adjacent to the family home.

This studio played a central role in Lionel’s upbringing. By age twelve, Smit was already working in clay and considered himself primarily as a sculptor in the making.At sixteen his parents separated, after which Lionel, a student at Pretoria’s Pro Arte School of Arts at the time, began to use the empty studio space his father occupied for painting. This was progressively becoming his preferred medium as he was finding his own artistic identity. He went on to graduate as the Best Painting Student in his class – the first in a line of accolades for this young artist.

Today, each of Lionel Smit’s works offers us an entry point into the variety and richness that lies beneath every face we encounter in life, whether applied in bronze or in paint. The blending of techniques across genres is a display of Smit’s work in multiple media, all bearing visible overlap.

His paintings start with abstract lines and swaths of colour that establish a base for the subsequently overlaid image of a face or bust – in most cases posed by anonymous models from the Cape Malay community. For Smit, the Cape Malay
woman epitomises hybrid identity within a South African context, and reflects the disintegrating construction of identity within our increasingly globalised world. His work is loaded with both historical and aesthetic precedent; clearly focused on the dialogue between the figurative and expressive abstract. Smit thus translates his own understanding of identity – drawing from images in his daily surrounds. Smit’s subject matter is consistent. The people he paints or sculpts possess a particular quality that appeals to his visual sensitivity, but nothing more in the way of social influence. The sitter’s face acts, quite simply, as a vessel for Smit’s experimentation with colour, stroke and technique. 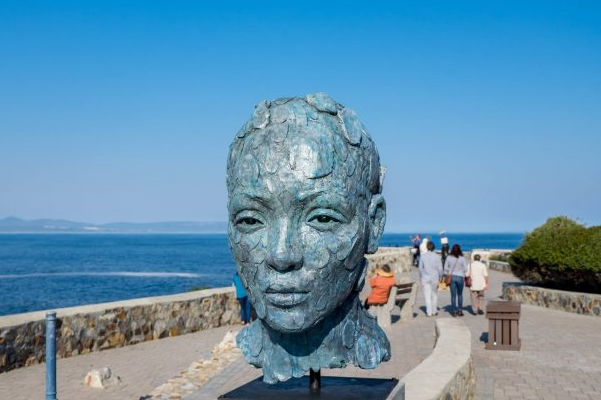