Dylan Lewis was born in 1964 and raised in an artistic family in South Africa. His father was an accomplished sculptor, his mother and his grandmother were painters, and two great-grandfathers were an architect and cabinetmaker, respectively. Lewis initially followed in the family tradition, beginning his career as a painter, but later turned to sculpture. Widely recognised as one of the world’s foremost sculptors of the animal form, he initially focused on the big cats; in recent years, he has used the human figure to explore our relationship with our inner wilderness. His international career spans two decades and includes exhibitions in Paris, Sydney, Toronto, Houston and San Francisco, as well as numerous one-man exhibitions in London, where he is among the few living artists to have held solo auctions at Christie’s London.

Dylan Lewis is represented by, and works closely with, Everard Read in South Africa and Britain, with whom he has a long standing relationship. 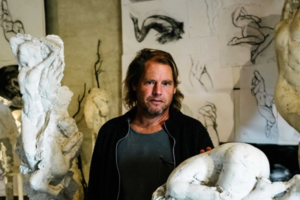