Guy often uses the image of a hare as a proxy for human behaviour. His hares are lively, witty, fast-talking
and delightfully unpredictable.
He writes, “… the hare’s six extremities hold sway over us, allowing us to smile at it and ourselves in turn”.

Guy du Toit uses a wide range of media in his sculptures, including bronze, stone, wood and steel, and draws in pen, ink and charcoal. He has exhibited extensively, both locally and internationally.

Guy du Toit’s apparent irreverence can obfuscate the fact that he is one of South Africa’s most accomplished sculptors. “Liberated” (as he says) by the advent of democracy in South Africa from having to concern himself and his art with the notions of identity, he has turned his attention to “less provincial” pursuits like reveling in form, concept and media for their own sakes. Du Toit uses the unexpected juxtaposition of bronze casts of universal, everyday found (and made-to-look-found) objects to invite his audience to invent dialogue themselves.

Guy has received several awards, he curates and adjudicates exhibitions. He has lectured at a number of institutions, including Pelmama Academy in Soweto, Pretoria University, Johannesburg and Pretoria Technicons, and the Johannesburg School of Art, Ballet, Drama and Music. He presents workshops throughout South Africa and has been involved in community projects, seminars and symposia.

The past few years have increasingly been spent on private and public commissions and in working closely with artists and businesses, especially those involved in design, communications, architecture, advertising and entertainment. Guy currently teaches part-time at the University of Pretoria.

Hare with baggage waiting for his
ship to come in 2020 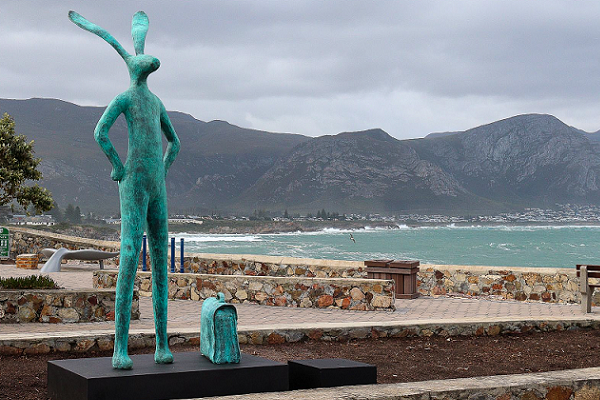