The Sculpture
The artwork was influenced by the dense thorny, sickle bush found around Giyani. Collen was born in Giyani on visits home, he was struck by the Sickle Bush that has grown entangled with each other. It is difficult for people, and animals, to find a way through these hedges.”From my artistic point of view I thought that if people were united like this, nothing could divide us. I imagined a colourful rainbow nation, holding on to one another, and allowing nothing to come between us. The branches that are falling may represent the divisions encountered from time to time or they may represent those that are divisive but are trying to restore unity.”

Collen was born in 17 January 1977 in a rural village called Noblehoek near Giyani Limpopo Province, South Africa. He comes from an artistic family. His father is a well-known sculptor.

After obtaining his diploma he worked as an full-time artist.

Just like his father, he works with wood. He paints most of his sculptures. He sometimes make life size sculptures. “My art is about the old and the new. I look at life generally where I make sculptures dressed in African and modern ways. I look at technological development. My mostly popular works involve people or couples speaking on phones or people dressed modestly.”

His works are collected by private people, corporates, museums and galleries. His aim is to exhibit internationally just like his father and other sculptors from his region like Jackson Hlungwani, Noria Mabase and others. 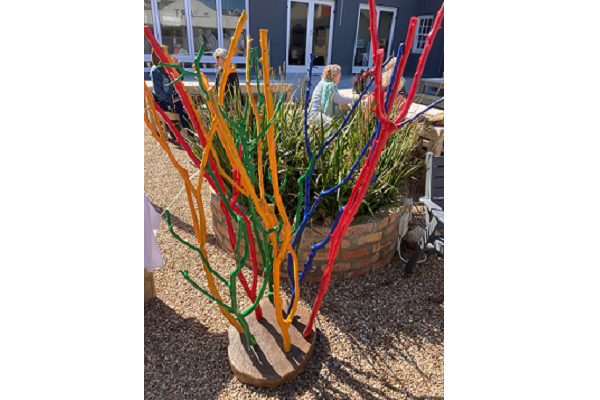