Beezy Bailey is a South African artist who works in various media, including painting, sculpture, drawing, printmaking and ceramics. He has been a full-time artist for 30 years, with over 20 one-man shows in London, Johannesburg and Cape Town as well as numerous group shows around the world. He received a fine art degree from Byam Shaw School of Art in London in 1986, after studying two years of life drawing and then a third in printmaking, painting and sculpture. Bailey says he creates art “as a balm for a mad world – a corrective for our most lamentable human qualities, including a planet brutalized by extremes of wealth and poverty, environmental ignorance and negligence.” Many of his works emanate from his abiding concern with the Anthropocene, the present epoch characterized as the time in which the collective activities of Homo sapiens began to substantially alter the earth’s surface, atmosphere, oceans, and systems of ecological recycling.

Bailey has a history of close collaboration with other artists, including David Bowie, Brian Eno and Dave Matthews. In Brian Eno’s words: “Beezy makes his art out of joy and laughter (and sometimes out of terror). He is somebody to whom art comes easily and who doesn’t feel guilty about it, who revels in his gift and has confidence in it – like a chef gleefully throwing ingredients in by the handful without ever measuring them. He cooks up new worlds, tiny and huge, peopled by bird-women, snake-men, lizard children, and animated vegetables, bursting with bright new music. He makes African jazz in paint, garish as the midday sun, dark as the deepest night.”

Often Bailey’s works are accompanied by poems, such as ‘1000 Year Dance Cure’, in which he exhorts the world to dance a new dance, to abandon that which does not serve us, and to embrace each other in our humanity, and the earth in her service to us. The sources of his imagery are elusive. In his own words: “Frozen dreams, images and legends enter from my subconscious, the realm of my imagination. I act as a conduit for visual messages greater than I am.”

Richard Cork, art historian, editor, critic and exhibition curator, says of Bailey, “Looking back over Beezy Bailey’s restlessly inventive career, we soon become fascinated by its defiant unpredictability. At every turn his work is filled with surprises and united above all by a fundamental urge to challenge the status quo.”

Bailey has been the driving force behind several art auctions benefitting various charitable institutions. In 2004, he organized ART 4 AIDS, an auction which raised over R1 million. In 2009, Bailey, along with Tara and Jessica Getty, organised the Art For Africa auction, held Sotheby’s in London. The auction presented for the first time a major offering of works by some of South Africa’s leading artists, alongside pieces by some of the foremost contemporary artists from the UK. The auction was held in support of two charities which fund and facilitate the care and support of orphaned and vulnerable children, the Africa Foundation and Ikamva Labantu. Beezy has exhibited in Germany, Austria, the Czech Republic and England, and has collaborated with a variety of artists from Brian Eno to David Bowie. His work is represented in several art collections, including the David Bowie Art Collection, the Getty Family Collection as well as the Oppenheimer Art Collection. 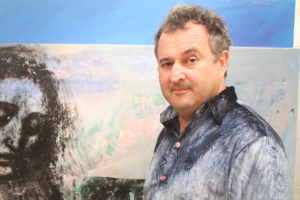